In 2016 the Freedom Flowers Project sponsored two events related to human rights. A further academic project on art and human rights is under evaluation.

FIFDH 2016
The International Festival and Forum of Human Rights took place from 4-13 March in Geneva and was a major success with 46 competing documentary and fictional movies, tens of thousands of visitors, lively debates and a Facebook audience of over 250’000 people. The FIFDH provides critical, investigative and creative film makers and documenters an international, high profile platform to show and discuss their works thus raising awareness for human rights issues especially with the younger audience.
The Freedom Flowers Foundation has sponsored the FIFDH with CHF 1’000 for the 2016 edition.

Human Rights Tattoo
The HRT was one of last year’s Freedom Flowers Foundation Award winners and is an art project by the Visual art collective Tilburg CowBoys and Festival Mundial which are tattooing the complete Declaration of Universal Human Rights with the full 6773 characters on 6773 human beings around the world (see a full description on our Award 2015 page).
We sponsored a two day performance at the FIFDH where Sander and his team tattooed 56 letters, increasing the Human Rights Tattoo community by 56 human rights ambassadors. Among the tattooed were Ndume Olatushani who spent 28 years in prison, 20 of which in death row, for a crime he did not commit. Also our founder Manuel Salvisberg received a tattoo.
The Freedom Flowers Foundation has sponsored the HRT with EUR 5’000 for the entire event. 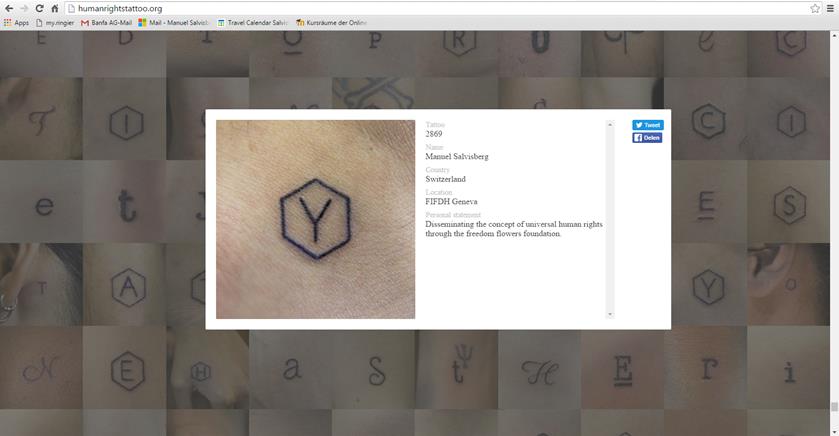